When #FortMacMurray Alberta, started to burn I, #LMWasylciw, like everyone else, sat staring in utter disbelief to see that such a disaster could occur. I watched parts of the many hundreds of video and in some cases viewed them to the end. It was so horrific that I was unable to stop myself. When the announcement came that the place of my birth, Worsley, was on evacuation alert, I felt like a part of me was about to be destroyed forever. I can only imagine the heartache experienced by the people of Fort MacMurray – many who have lost everything. 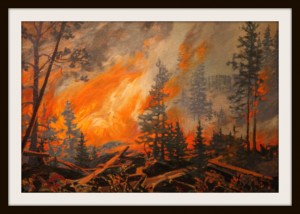 What makes me even sadder is that we are all responsible for the state of the world. If only we, as consumers, had, long ago, known that fossil fuels – oil and coal alike – would be so destructive, we might have done things differently. Now we have passed this problem on to the next generations.

April temperatures of plus thirty degrees celcius  in northern Canada was once unheard of. As a child early springtime weather would have required me to still be wearing my winter coat and snow boots. Now people go out for a picnic and pretend that it is the norm. In Alberta, during the 1920s it was not unheard of to lose one’s crops to a July, summer frost. Yes, global warming, climate change, or whatever term one chooses, is a normal occurrence BUT not at the rate in which it is happening.

The very forests that provides us with the oxygen that we need in order to breathe are being wiped out. I am terrified to think that it is too late to fix what we have done.

Long before the forest fires raged in Alberta, I wrote a story, one about the world in which we live, reflecting my concerns about climate change. I invite you to read #TheTwistedSpire.