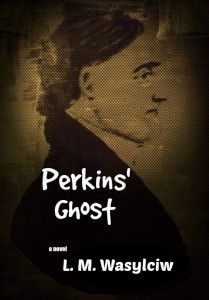 I enjoyed this one. It is a good read, with interesting characters and plot. A good “who done it”. The ending is a surprise, and moving. It will be of especial interest to anybody from Liverpool, Nova Scotia, where the story takes place. The author has a good knowledge of places and local customs, and puts it all together well.

Trailer for the novel – Perkin’s Ghost

On opening night of the stage play, Perkins’ Ghost, at the Astor Theatre, a shocking murder had occurred, leaving many residents of the sleepy hollow to suspect that the murderer might have been that of the ghost of Simeon Perkins. With virtually no clues to follow, apart from the unexplained sightings of a Perkins look-alike, clairvoyants, fortune cookies, intuitions and a seemingly odd connection between the murder or murderer and the Kings Orange Rangers. Sergeant Hill wondered if the murderer would ever be found.

The little town of Liverpool, Nova Scotia, once booming with industry, had settled into itself. Ancient trees lined the streets, dappling patterns on the Colonial and Victorian homes. It was a quiet place, where retirees settled and where tourists went to soak up Canadian history or to sit alongside the Mersey River, watching as it glided by while listening to birds twittering in the trees. Nothing newsworthy had ever happened in Liverpool until a murder had occurred.